Indiana State Police say two people were killed in a crash on I-69 near the 106th Street exit in Fishers. The crash involved a semi and a passenger vehicle and happened just after 5:30 p.m.State police  identified the two people killed in the crash as 19-year-old Marcus Padgett and 17-year-old Elizabeth Robertson. According to state police Marcus Padgett was the driver with Elizabeth Robertson the passenger.

Emergency Crews on scene of a fatal crash on I-69 southbound near 106th street. Only 1 lane is open, seek alternate routes

Interstate will be restricted for at least 2 hours

Unfortunately. the circumstances surrounding the fatal crash remain under investigation.

Indiana State Police believes that the driver of the passenger vehicle, Padgett,  swerved to avoid shredded tire debris and lost control. After losing control, the car then spun into the path of the semi-truck and was struck. The result was that both of the vehicles occupants were pronounced dead at the scene.

The driver of the semi was transported to an area hospital to be treated for minor injuries. That driver has been identified as Anthony Manuel, 52, of Georgia.

As a top-rated Indiana car crash attorney, we help represent our clients that have been in many types of car accidents or truck accidents that result in death or severe injury. Call our office at 888-228-7800 to speak with an expert personal injury attorney today.

One person is dead after a crash involving three vehicles late Monday, May 25th  2020 on the city’s east side.

It happened just before midnight near 36th Street and Emerson Avenue.

Metro police offered few details shortly after the crash but confirmed that one person was killed and “several” others were transported to area hospitals.

The nature and extent of the injuries were not available.

Wearing a seat belt not only protects drivers and passengers, this Indiana law saves Hoosier lives. 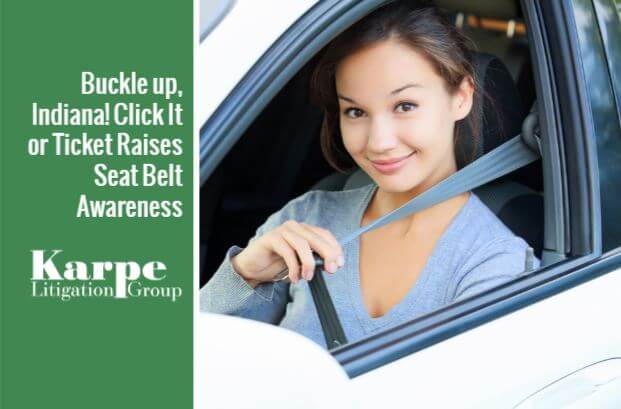 Police are out in increased numbers to enforce Indiana’s mandatory seat belt laws. Participating in the national Click It or Ticket campaign, Indiana law enforcement is working overtime, giving citations to drivers who fail to wear seat belts while driving or riding in vehicles.

The overtime pay for officers is covered by a grant from the National Highway Traffic Safety Administration. Over 230 law enforcement agencies in Indiana participate in the annual campaign, patrolling day and night to bring awareness of seat belt safety to drivers and passengers, both in front seats and in the back.

Seat belts protect drivers and passengers, even in non-serious crashes. “These are crashes that, when you look at the vehicle, you think someone maybe got a little banged up, and then you find out they were killed because they got ejected,” Indiana State Police Captain Dave Bursten tells local Indianapolis radio station WIBC. “No one plans on being in a crash. But crashes happen. And once the crash happens, you can’t freeze-frame and put your seat belt on to protect yourself. You do that by putting it on as soon as you get in the car before you pull out to drive.”

Lt. Jefferey Paine of the Indiana State Police tells local Indianapolis news station WTHR, “It is absolutely heartbreaking to see the aftermath of a crash where a fatality could have been prevented by wearing a seat belt. Click It or Ticket is more than an enforcement campaign, it is an educational effort to increase seat belt use and decrease fatal crashes.”

Male drivers aged 15 to 44, especially those under 25, are most likely to not be wearing a seatbelt at the time of a crash, according to State Police. Injury rates for unrestrained drivers and passengers are also higher:

In fact, Indiana motorists are more likely to suffer property damage, injuries or death from a traffic accident than to experience a burglary, to be the victim of a violent crime or to be murdered.

Prior to 1980, seat belt usage in the United States averages about 11%. In 1980, small campaigns to increase seat belt usage begin to pop up. Individual organizations, public education programs, incentives and policy changes work to change perceptions. However, without any actual laws on the books, these efforts only make a slight difference. By 1984, seat belt usage only climbs four percentage points.

The Click It or Ticket campaign begins as a statewide effort in 1993 when North Carolina Governor Jim Hunt launches it in conjunction with a “primary enforcement safety belt law,” which allows officers to issue seat belt citations without first observing another offense. Other states follow and in 2002 the National Highway Transportation Safety Administration starts the first national campaign.

The campaign has been deemed a success by its backers. The U.S. Department of Transportation releases a statement in May 2003, “National belt use among young men and women ages 16-24 moved from 65% to 72%, and 73% to 80% respectively, while belt use in the overall population increased from 75% to 79%.”

In 2018, the 230 agencies involved with enforcing the Click It or Ticket campaign in Indiana put in nearly 29,000 hours of overtime to crack down on seat belt violations and write 32,000 citations and warnings.

Make Sure You are Properly Buckled

Indiana State Police provides reminders on how to properly “buckle up”:

Senior Trooper Nick Klinghammer of the Indiana State Police tells local Indianapolis station RTV6, “Most times you’re involved in a crash, it’s within five to10 miles of your house, so hopefully we prevented something here. If you don’t click it, you’ll get a ticket.”

If you have been involved with a seat belt violation, talk to the professional attorneys at Karpe Litigation Group today. We are experts in auto accident law, winning the most challenging cases and helping those in need for 20 years and counting. There is no fee until we win for you. Committed to making things easy for you, we are happy to meet by appointment on evenings and weekends, and travel to you when needed. Give us a call today at 1-888-228-7800 or fill out our contact form to schedule your free initial consultation. 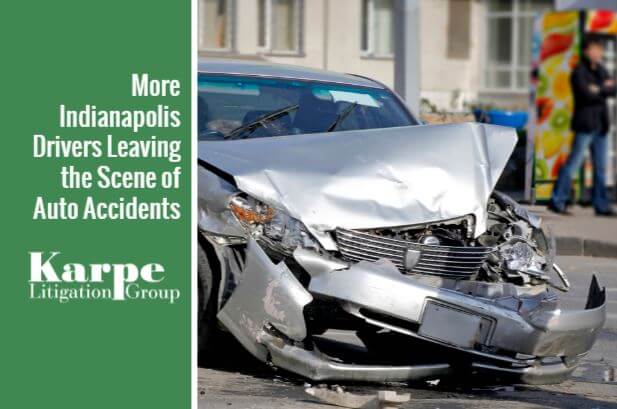 On a Friday night in May 2019, a man is killed on the near west side of Indianapolis. According to Indianapolis Metro Police, a dark-colored passenger car slams into his Ford F-150 while he is likely lying underneath, working on the pickup outside of his home on West Michigan Avenue.

The driver of the car takes off on foot and the man, unidentified and transported to Eskenazi Hospital in critical condition, is pronounced dead on arrival. Neighbors express surprise that someone would be working underneath a vehicle on this very busy road, particularly after dark.

Hit and run auto accidents such as this are not only tragic, they are all too common – especially here in Indianapolis where reports of drivers leaving the scene of auto accidents continue to rise.

Three Injured on the Near East Side. Fox 59 reports in April 2019 on a hit and run accident that causes serious bodily injury to three unnamed adults. The incident involves three vehicles and occurs around 3:40 A.M. at E. 38th Street and Arquette Drive. Police are still searching for the suspect, who was driving a green 2001 Chevrolet Silverado, according to witnesses at the scene.

11-Year-Old Girl Injured. An accident on the eastside of Indianapolis leaves police searching for the driver, according to RTV6. Rickonna Dixson and her 11-year-old daughter are waiting on East Pleasant Run Parkway North Drive to turn into the Kroger at the Twin Aire Shopping Center. Rickonna recalls looking in her rearview mirror and seeing a truck she thinks is moving too fast. When that truck slams into her, the impact is so hard it pushes her into oncoming traffic where she is struck by a van.

“When we were hit, all I could think about was my daughter in the back seat,” Rickonna says. “It’s a miracle, really a miracle, that my daughter made it. She has half of her ear missing. My car is totaled.” Police are still looking for the driver of the 1997 black Dodge Ram that hits them.

Leaving the Scene of An Indianapolis Auto Accident Costs More

A Fox 59 investigation finds a sharp increase in the number of hit and run car accidents after analyzing crash reports obtained from the Indianapolis Metro Police Department (IMPD). “In 2016, there were 5,049 hit and runs reported to IMPD; 543 of them involved injuries. The next year, that number jumped to 5,539 hit and run reports. The number of injuries jumped as well, to 594. By October of 2018, IMPD had already written up 4,236 hit and run reports with 398 of those reports involving injuries.”

In the face of more hit and run accidents than ever, Indiana Governor Eric Holcomb recently signed a bill into law creating more serious penalties for drivers who leave the scene of a crash. Now, a hit and run that results in a fatality is considered to be a Level 5 felony. Before, drivers thought they would see more leniency in sentencing after leaving the scene. Today, the law clearly states that running will result in a more serious punishment.

14 Hit-and-Run Accidents a Day in Marion County? The Number Is Rising

Analyzing data records for Marion County, a noticeable spike in the total number of hit-and-run incidents is revealed. In 2007 there were a total of 5,315 hit and run accidents reported, and that number stays pretty consistent for the next seven years.

Even in the year with the lowest number of incidents (4,908 in 2011), there is still an average of 14 hit and run accidents per day. And that number appears to be on the rise.

Reasons Drivers Leave the Scene of An Auto Accident

Why would someone leave the scene of an accident? After all, it’s unlawful and irresponsible, not to mention inhumane. The most common reasons include:

Fortunately, most hit and run accidents do not cause personal injury. There can still be great cost associated with a hit and run, including property damage and emotional distress. Even just focusing on the number of accidents with injury, the number is rising along with the number of total accidents.

The most shocking jump in numbers when analyzing the Marion County data is the number of hit and run accidents resulting in death. In 2007, only four hit-and-run auto accidents claimed a person’s life. By 2014 that number jumped to 14 and then jumped to 20 in both 2015 and 2016. In fact, of the 120 fatal hit and run accidents over the past 11 years, nearly half (45.83%) occurred in the last three years.

At Karpe Litigation, we’re all too familiar with the pain and suffering that can be caused by a hit and run auto accident. If you should ever find yourself in a situation where you have caused an accident, make sure to remain on the scene.

If you are a victim of a hit and run auto accident, talk to the professional attorneys at Karpe Litigation Group today. We are experts in auto accident law, winning the most challenging cases and helping those in need for 20 years and counting. There is no fee until we win for you. Committed to making things easy for you, we are happy to meet by appointment on evenings and weekends, and travel to you when needed. Give us a call today at 1-888-228-7800 or fill out our contact form to schedule your free initial consultation.